What is the purpose of All Ages of Geek? What’s our goal we’re trying to achieve in this world of striving to reach new goals and heights? My name is Christian Fontenot and I’d like to tell you a little about All Ages of Geek.

All Ages of Geek’s goal is quite simple, unite the geeks/misfits of the world and to spread the beauty of geek culture. We unite the geeks of all ages through webisodes, articles, podcasts, gaming, anime and manga reactions, online interactive communities and livestreams on Twitch. We do both live reactions on Twitch, anime, movie and cartoon reactions, gaming and challenges on YouTube and more original content on our website! We’ve reacted to very well known and beloved anime such as My Hero Academia, RWBY (which we at least count as an anime), Kimetsu no Yaiba and more for our series Weeb Watch-a-Thon! Our purpose is to unite the geeks of all ages and prove that geek culture can be enjoyed by everyone regardless of gender or age and that geeks deserve to be treated just like everyone else.

All Ages of Geek has both kid and adult content so we’ve got you covered no matter the age.  All Ages is the name after all! Although AAOG was originally Founded by Katya Stec in New Jersey, our company first started as a Let’s Play channel on YouTube called Miscat Squad, then a reaction channel and in recent years became known as a start-up company producing a wide range of New Media Geek Culture related content. It was later renamed All Ages of Geek due to our priorities changing. The need for both interactivity and community inspired this change and we’re so happy we made it.

All Ages Of Geek has a variety of different Let’s Plays for you to enjoy such as Life Is Strange, God of War, Spider Man for the PS4 as well as older games such as Spyro the Dragon and Crash Bandicoot. The way we do Let’s Plays has changed a lot since our Miscat Squad days but gaming is still something we are very passionate about. We have a series called Lore Behind the Game which explores, you guessed it, the lore and story behind different games like Overwatch, League of Legends, World of Warcraft and more.

All Ages of Geek lives by the phrase “Interactivity Over Community” meaning that while the community is very important, an interactive community is even more needed, especially in geek culture. After all, what’s a community without interaction? Our platform is about helping others and having our audience experience something new and exciting with a friend.

After the re-brand from Miscat Squad to All Ages of Geek was announced, the channel slowly but surely changed its focus from Let’s Plays and gaming to the whole entirety of geek culture. All Ages of Geek is a “safe haven for geeks” who desire a place with a more positive outlook on geek culture and want to avoid the rapidly growing toxicity within geek culture and fandoms. We don’t tolerate bullying or anything of the sort of any kind within our community.

We are advocates for more diversity in geek culture and gaming, including those with disabilities. In fact, I have several disabilities but was welcomed with open arms to work alongside All Ages of Geek. We strongly believe in inclusion and advocating for those in the disabled community. All are welcome to join the community!

We also have many shows coming up and many that are already airing. Including All Ages of Faith which will be hosted by myself and will teach about the Christian faith through geek culture references, Pop Filter hosted by voice actor Erik Scott Kimerer and Katya Stec, and The Geekoning Podcast, an “after hour” type podcast where we talk about anything and everything. As well as more to come!

All Ages of Geek has seen both many triumphs and mishaps. Some of our achievements include the soft launch of our new website, almost 100k subscribers on YouTube and most importantly, changing how geek culture is seen.

Often, geeks lack a very interactive and safe place where all opinions are welcome, which AAOG strives to provide. Is your opinion unpopular? We don’t care! All opinions are welcome so long as they are respectful. We love having everyone involved in all of our projects including live streams and podcasts.

We’re all for utilizing the power of raw and honest/unscripted content. Reviews, reactions, podcasts, you name it! All of our content is honest and human. Nothing we say or do is scripted which makes our content more relatable.

So if you’re a geek looking for a safe place to be yourself, All Ages of Geek is the place for you. If you’re looking to see the misfits of the world united under one banner, join us. We accept everyone from all corners of the world and all walks of life so long as you believe strongly in the power of geek culture. Help us unite the geeks of all ages!

On a final note, I want to share why I joined AAOG. I first ran across the channel on YouTube in late 2018 and fell in love with how welcoming the community was as well as the content. The “for the geek” a phrase we stand by was truly being lived out and after a while of interacting, I became a member of the team and wouldn’t trade it for the world. All Ages of Geek gave me a sense of belonging and saw beyond my disabilities. And we’ll do the same for you! 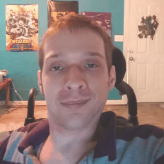 Christian Fontenot is All Ages of Geek's Newsletter manager and Content Curator for All Ages Of Geek. He has been heavily involved with leading troubled youth in church and church leadership in general and is an advocate for the disabled communities.

How to play retro arcade games on PC

No Newer Articles
1 week ago