Our guide is suitable for those who have not played Vanilla for a long time. And also for those who decided to try it for the first time. First of all, you have to choose who you want to play with. Of course, you could choose intuitively or based on your usual tastes. But this approach can lead to the fact that your first character will be ineffective and you will spend time pumping it in vain.

Therefore, it is always worth reading a couple of guides in which they tell which class is the best for what role and which professions to choose for them. You can read a lot of information about this in our WoW Classic Best Race and Class Combos Guide. But it may seem quite loaded for beginners. And is more specialized in letting you know what race to choose for a specific class. Therefore, we wrote a separate guide for those who are just starting to play WoW Classic.

First you need to decide what role you will play. As in any MMO game in the World of Warcraft, there are three main ones.

But they cam also variate:

Or have some specifics in particular classes such as:

Tanking champions are those that fight in melee and control the aggro. Their task is to protect other party members. Healers can support with counterspells or buffs, but their main task is to heal tank and other party members. DPS no matter melee or ranged have to deal a lot of damage to enemies while tank disturbing them and healer supports the tank. About hybrid and solo classes we will tell you a bit later.

We can safely say that you will not find a better class than a warrior for a tank. All his abilities help him control the aggression of the enemy and at the same time survive.

All these qualities are realized thanks to aggressive skills and those that protect the warrior. Such as Shield Wall and Last Stand.

Shield Wall: A buff that reduces the damage taken from melee attacks, ranged attacks and spells by 75% for 10 sec. Requires defensive stance and lasts for 30 minutes.

Last Stand: Activate this talent to grant you 30% of your maximum hit points for 20 seconds. After the effect expires, the hit points are lost. Requires warrior Protection spec.

Thanks to them, a warrior can keep aggro in situations where other classes could not cope with this. You can check the Protection Warrior Guide for more information here.

The classic healer in WoW is Priest. He, like a warrior, was created for his role.

If you are convinced that you want to play with the most effective healer, then you will not be mistaken when choosing a priest. All of his abilities are geared to being an effective ally. Moreover, he has the widest range of healing abilities.

You can find all kinds of builds for the priest. But, its main advantage is Power Infusion (Infuses the target with power, increasing their spell damage and healing by 20%. Lasts 15 sec.) Thanks to it, you can give your allies a huge advantage.

Rogues are masters in dealing damage. They fight only in melee but that is not a problem for them getting enemy by surprise due to stealth. Rogues are magnificent assassins and poison masters.

Unlike mana, they have energy that is replenished. And their abilities generate stacks to deal even more damage with finishing abilities.

Some of the most useful and determining Rogue’s abilities are:

Thanks to them Rogue always sets the tone for battle. Thanks to his incredible abilities to hide and on getting out of stealth causing enemies micro stuns. If you learn how to sequence your abilities correctly it will be very hard to take you down.

Mages have three ways to develop their talents. These are various schools: frost, fire and arcane. Mage is a pure damage class.

A useful feature of mages is that, thanks to their protective spells and control, they can come out of the water dry easily. They are good at dealing damage on a single target in the same way as on many due to area of effect spells.

Thanks to the frost school, mages can freeze the enemy and retreat to a comfortable distance while continuing damaging their target. Moreover, they can enter a block of ice protecting themselves from any external damage. The fire branch does more damage by setting the enemy on fire, but it is not so strong in defense. Arcane branch is designed to give more utility such as portals, blink and mana shield. In addition to it arcane skills can conjure food for all party members, which can be extremely useful.

Shamans, like any other hybrid class, can be tricky for a beginner. Indeed, instead of studying one role, you will have to master all three roles at once!

At the same time, shamans are the most varied heroes. They can easily level up on their own thanks to totems, they can off-tank in a pinch, and they’re great at healing with party buffs that are handy in strengthening DPS in raids.

Although if you still could not determine your role in the game, it is likely that thanks to the hybrid of the Shaman, it will be easier for you to understand which role suits you best. But do not forget that Shamans are only available for the horde in WoW Classic.

It is pretty much obvious what it means to be a solo class. There are some options in World of Warcraft classic for playing a solo class. But the most effective one is Hunter.

Hunters are master marksmen, trackers, and survivalists. They are pure Ranged Damage Dealers who seek mastery over the wilds. And that wilds help them in battle. At the 10th level hunter gets an ability to tame an animal that will accompany him in battle.

There are several types of beasts in WoW classic that a hunter can tame. Their main differences are in their abilities set and role. Thus you can tame a bear to help you as a tank, or a cat (tiger, puma etc.) that will be ferocious dealing increased damage. If you take Beastmaster branch your pet will become a great companion. Which will let you level solo without any problems. 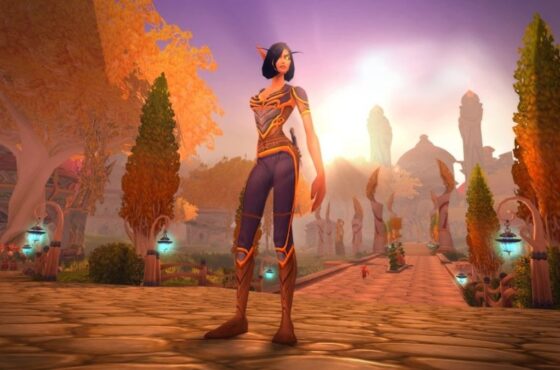